The Affair: So what happened to me? 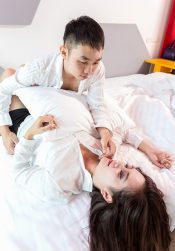 How could an affair happen to me?

The affair all started innocently enough that what you didn’t realize was that an addiction was taking place.  This is a very common addiction that is similar to the effect that crack cocaine has on the brain.

There are boundaries that every married couple must use if they are to remain safe from an affair.

Movies or television shows often portray affairs as excitement  and a way of release.

To many an affair is like a solution to depression or boredom .

In Matthew chapter five verse five Jesus really knew what he was talking about when he said;

“But I say to you, everyone who looks at a woman with lust has already committed adultery with her in his heart.“

So let’s discover what really happens when you’re looking at that woman or that man with lust in your heart…  Because it really isn’t as innocent as you may think!

I “slipped” now I need help!

The first thing that happens to your brain is a flood of the neurotransmitter dopamine.  One of the functions of dopamine is to heighten the sensation of pleasure

Dopamine increases your energy so the first time you make this person that you lust after it makes you feel very very good!

Some people say “I haven’t felt this alive in years”, but there’s a price to pay!

Once an individual entertains a lustful thought about another person the next time they see that person even before talking to them dopamine floods their system  and the person now becomes associated with intense pleasure.

Oxytocin is another chemical in the brain that is associated with love.  This chemical has released in the brain during hugging kissing and cuddling and it makes you want to do these things even more.

Oxytocin makes you more emotionally open in general which is why many people during the early stages of affairs experience heightened senses of well-being and believe that the affair is actually good for them.

So the more time that you spend with this person the more they become an object of obsession. Where things really start to go wrong and the brain is when that the individual now hast to keep the affair the secret.

A part of the brain called the Singulate Cortex is essential to emotional responses and it is wired for truth.

So when we are keeping the affair as secret the Singulate Cortex is not allowed to perform its natural functions.

Instead the Cortex become stressed and releases stress hormones such as Cortisol.

Monday we will discover “The Antidote”

I “slipped” now I need help! Temperament…what you wish they knew about you